I’ve learned many lessons during my travels, the most important of which is “to become a world traveler, one must stop being a tourist.” I interpret this to mean a world traveler goes off the beaten path.

I’ve been fortunate in my travels to go off the beaten path. In doing so, I found a few hidden gems. These locations are often avoided by many tourists, but to world travellers like me these destinations hold the key that unlocks the heart of the adventure.

The next time you’re in the United Kingdom, take a journey and visit two gems in the North of England – Lancaster and Blackpool. I visited these destinations as part of my 2017 Summer Adventure. Why these two cities? Well, why not?

In Lancaster I was lucky to snag a room at the Thurnham Hall, a grade-I-listed 17th-century country house in the village of Thurnham, Lancashire. What a place! The grounds were gorgeous, the apartment was elegant and relaxing. The on-site restaurant was picturesque and the food delicious, especially the Sunday Roast and the White Chocolate & Raspberry Cheesecake with French Vanilla Ice Cream. Yummy! 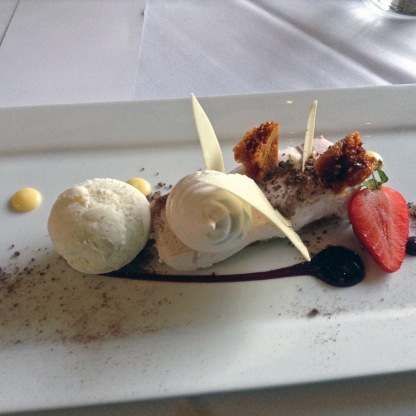 And having a flock of ducks acting as my alarm clock every morning ensured I didn’t sleep away the day!

For this trip I rented a car, an expense I normally try to avoid when travelling around Europe and the UK. However, there are times when a car hire is needed to ensure proper exploration of hidden gems. Thus me and Ben, that’s what I named my rental, headed out to explore the city of Lancaster.

First on the day’s agenda was Lancaster Castle, which at one time was known as Her Majesty’s Prison Lancaster. Very excited to visit, however, there was one entity I forgot to consider – Mother Nature.

I’ve visited England enough to know the weather isn’t all sunshine and clear skies; that every now and again some rain must fall. Yet, on this day I couldn’t help but feel that someone anger Mother Nature because she threw a fit. It rained worse than cats and dogs so much so that I had to buy a much stronger umbrella. Yikes!

Despite the rain, I ventured into Lancaster Castle. No photos allowed of inside as the castle is still a working court. Cameron our tour guide brought a little fun and life into the tour. A lovely visit.

After Lancaster Castle, I visited Williamson Park and the Ashton Memorial before checking out the Lancaster City Museum. One of the things I love most about England is the plethora of free museums to visit. A trip to Lancaster Priory completed my trip.

The next day, Ben and I journeyed to Blackpool. Walking along the promenade reminded me of the Santa Monica pier. The major attraction is Blackpool Tower and I was anxious to ride to the top and get a glimpse of the view from the Blackpool Tower Eye, the highest observation deck in North West England, which offers a majestic panoramic view of Blackpool seafront.

Alas, Mother Nature was still a bit testy and unleashed 47 mph winds, which forced the closure of the tower for safety reasons.

I was a bit sad, but Blackpool cured that sadness with it’s other offerings – one of which is the scintillating Blackpool Pleasure Beach. I felt like a kid again! After the Pleasure Beach, a visit to Madame Tussaud’s was in store. I never seem to have time to visit the one in London, but Blackpool was happy to host me.

A quick visit to Houndshill Shopping Centre for a bit of retail therapy conclude my day, and my short holiday to the North of England.

Had a blast exploring these Hidden Gems!

HAVE PASSPORT, WILL TRAVEL!