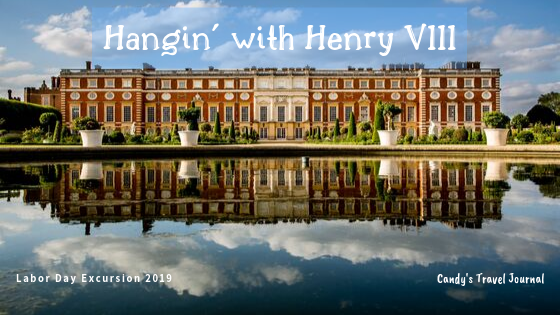 Hampton Court Palace – Once home to Henry VIII (who was born on June 28 – just like me 😊), visiting the palace has been on my bucket list since 2002. It took a few years, but check off another item.

I arrived about 15 minutes after the palace opened and the moment I walked through Anne Boleyn’s Gateway, I knew my visit would be #AMAZING. 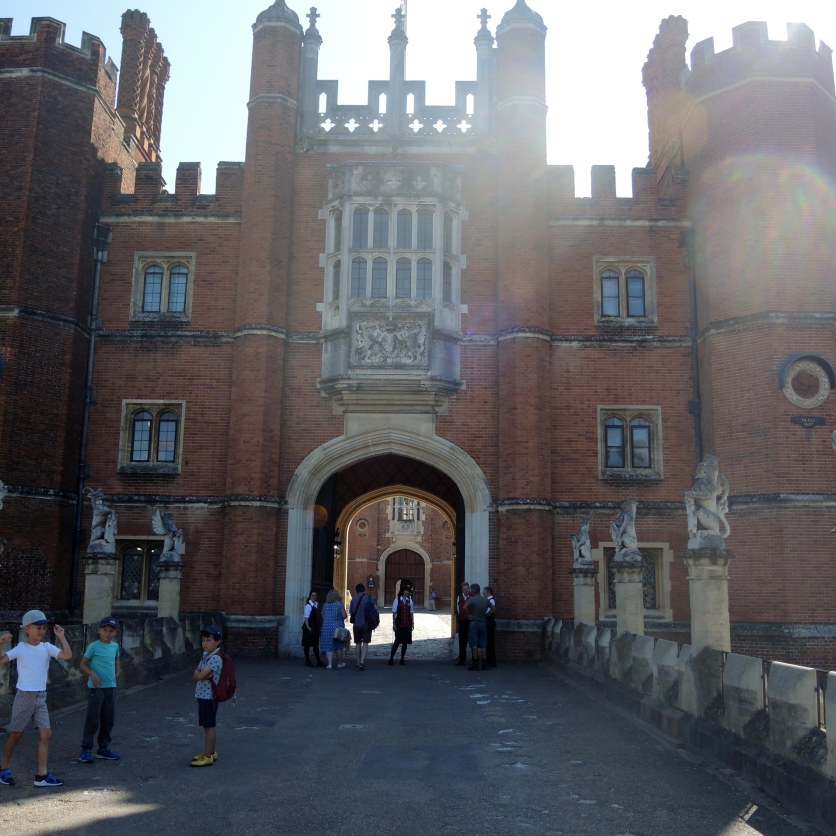 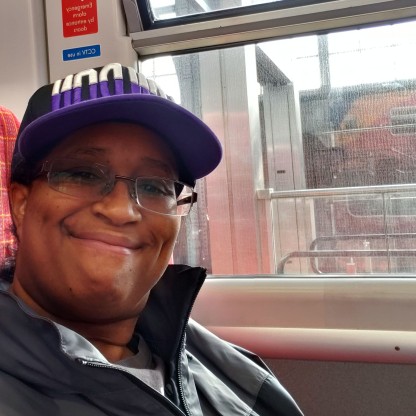 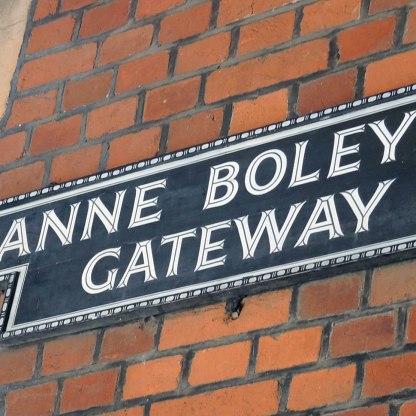 The weather was, as Goldilocks loves to say, “not too hot, not too cold, but just right.” 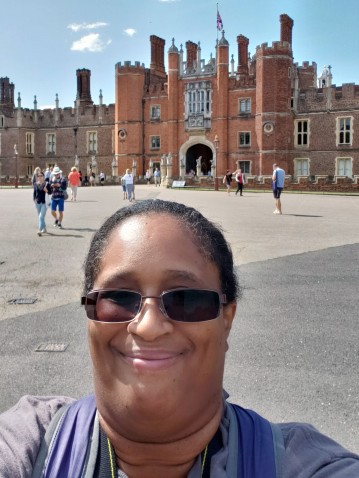 Although Henry’s Kitchen was the portion of the palace I wanted to visit the most, I began my visit touring Henry VIII’s State Apartments.

The Great Hall was the first room everyone visiting the apartments entered. It was large, but not as large as I’d imagined. However, the tapestries and the decor was truly extravagant. Nevertheless, I enjoyed reading how the Great Hall played host to the drama and intrigue of the royal court. 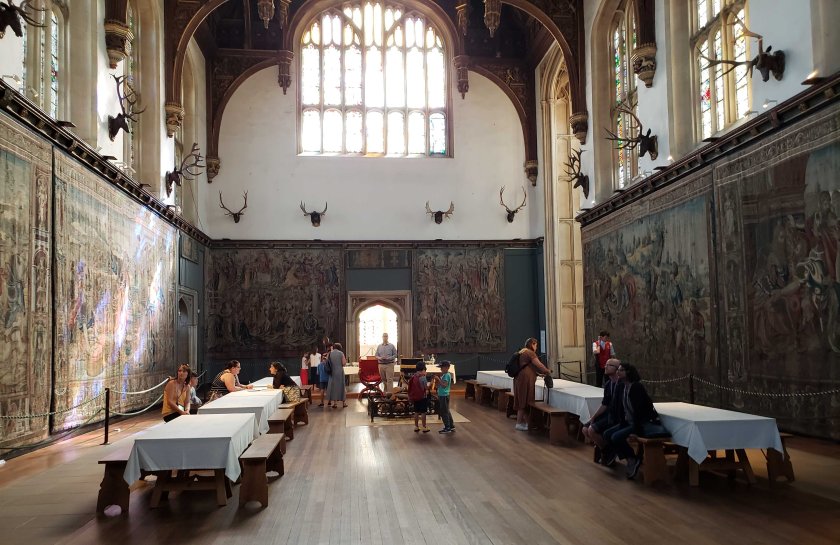 Oh, and I made sure to watch my gossiping, for I spotted a few “eavesdroppers” glaring down from the perch.

The Great Watching Chamber was another part of the palace I found interesting. The Chamber got its name because it was the first of the King’s state apartments beyond the Great Hall. It is also were the Yeomen of the Guard “kept watch” and control access other privy chambers.

My favorite bit of the State Apartments was the Privy Council room. I love hearing the various reenactments like the “Establishment of the Church of England;” “The Execution of Anne Boleyn;” “The Fall of Thomas Cromwell,” and “The Fall of Catherine Howard.”

Before access the Privy Council room, one had to pass through the Processional Route and the “Haunted Gallery.”

Here I walked the same route Henry VIII’s took from his private apartments to the Chapel. Legend says that the “Haunted Gallery” is so named because this is where Catherine Howard, Henry VIII’s fifth wife, ran down the hall in hopes of finding Henry and pleading her innocence after she was charged with adultery. 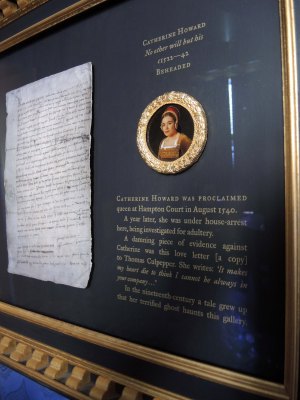 There have been sightings of Catherine’s ghost running through the Haunted Gallery, still screaming for mercy.

The Chapel Royal was splendid to gaze upon. Alas, as it is still an active chapel, photos are not allowed inside the chapel. These photos are from www.hrp.org.uk.

And as always, no trip to any medieval palace is complete without a trip to the true “privy chamber.”

Drawing of a Garderobe

I know “Groom of the Stool” was a very important job, and probably one many people coveted back in the day, but I think I’d prefer cupbearer.

Nevertheless, it was fascinating learning Henry VIII had hot and cold running water in his privy lodgings. Doesn’t seem very interesting in today’s world, but given the thoughts on water and hygiene during the 16th century, Henry having running water was a rare thing.

What really surprised during my visit was the fact Hampton Court Palace was used by the Hanoverians. I thought the Stuarts were the last to actively used the palace.

Another surprising aspect of my visit was learning about the Chocolate Kitchen. Seeing the kitchen and learning about Thomas Tosier, George I’s chocolate maker, was quite sweet.

Tosier also ran a chocolate house on Chocolate Row in Greenwich, south east London. His wife Grace managed and expanded the business while Thomas worked at court. It was very popular and often mentioned in the social pages of newspapers.

I finally discovered Henry VIII’s Kitchen. The kitchen was really neat, but compared to the Great Kitchen at Stirling Castle, Henry kitchen didn’t quite match up in detail. Then I learned a large part of Henry’s kitchens are no longer accessible, which explains why it wasn’t as detailed. What a Bummer! 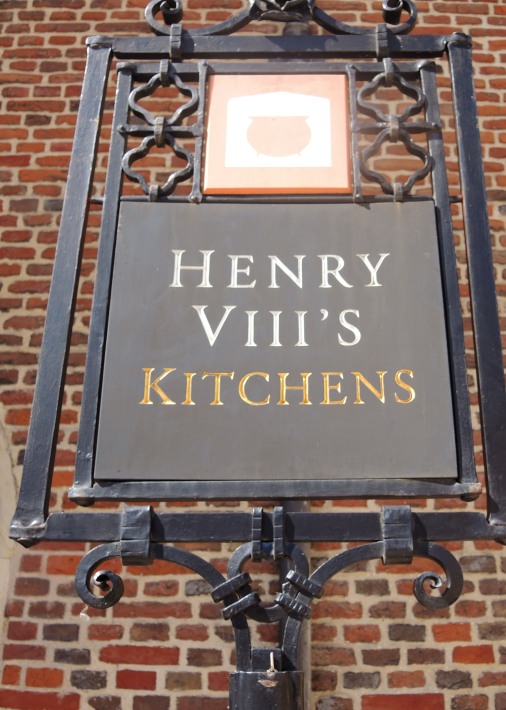 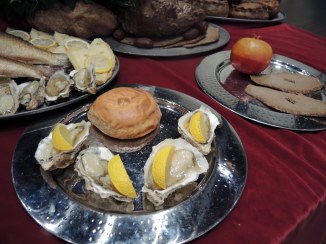 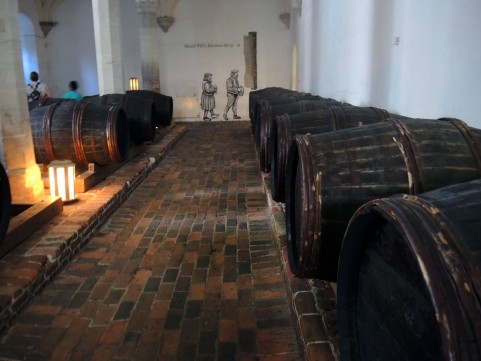 Boy, Henry really knew how to party, didn’t he? 🍻

Henry’s Kitchen gets extra props for having live re-enactors discussing the tales of court. And MEGA props for having a “kitchen boy” turning the spit, cooking real meat over an open fire. That was a highlight. 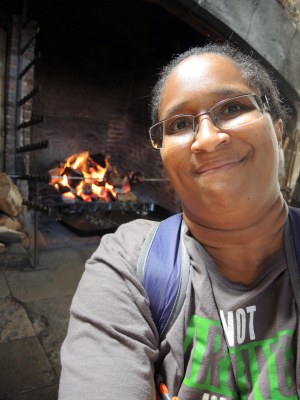 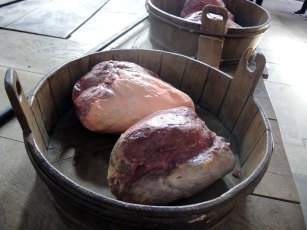 My mouth was drooling after watching that meat being spit-roasted. 🤤

I was so glad The Privy Kitchen Café was nearby. The eatery is located in what once was Elizabeth I’s Privy kitchen, hence the name. 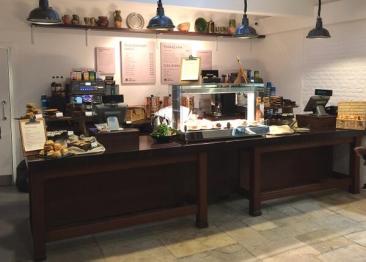 I didn’t make it to the Royal Tennis Court because of an there was an event scheduled. Not disappointed because this gives me a reason to visit the palace again. Yea!!!!

Of course, the visit wouldn’t be complete without a trip through the famous Hampton Court Maze. 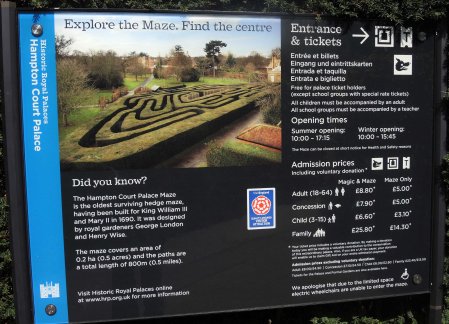 My joy at reaching the maze’s center was eclipsed by exhaustion. I didn’t attempt to find my way back through the maze, so yes, I took the easy route out.

I took a few more photos before I decided it was time to return to the 21st century. 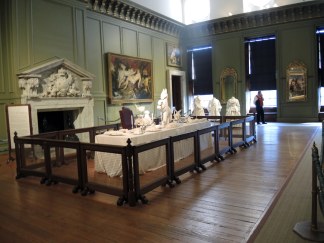 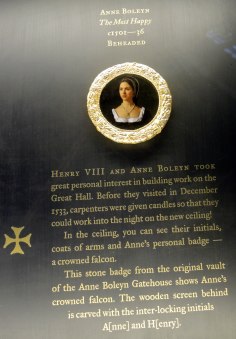 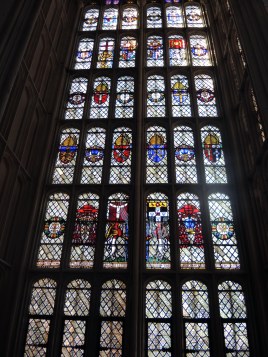 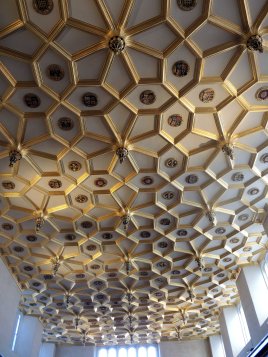 If you haven’t visited Hampton Court Palace – why not? It’s an awesome place – history, fun and royalty all roll up in one location.