Aww, London! Always such an exciting place to explore. This wasn’t my first visit to the UK capital, or even my second. Okay, okay it’s my seventh or eighth. I’ve lost count.

Following my stay at Cromer, I spent the weekend in London before jetting to Portugal. This year, I focused on exploring sites off the beaten path, if only to avoid all the tourists still hanging around waiting to catch a glimpse of the new Duchess of Sussex.

After checking into my lovely room at the Apex City of London Hotel, I headed to Tower Hill Station (a mere two minute walk from the hotel – a big plus). I re-upped my Oyster Card and headed to Tottenham Court Road. Why? My visit to the world-famous British Museum began here. 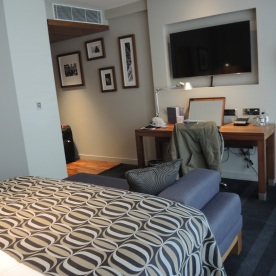 Aww, the British Museum, the first public museum in the world. Best bit – it’s free to enter. This was my very first visit to the museum, but I know it will not be my last.

First I headed to the Clocks and Watches gallery. Don’t know exactly why, but I’m fascinating with clocks and the concept of time. Next time I’m in town, I planned to visit the Greenwich Observatory. I bypassed the Rodin exhibit as I’d seen this when the exhibit was in Scotland in 2013. I headed instead to the Ancient Greece and Rome galleries. The Greek and Roman life room was the most interesting to me. I had a great time seeing how was then and comparing it to now.

I perused a few other galleries, but it was the Money Gallery that was the best (I’ll give you one guess as to why, ha ha). Lovely visit, lovely time and wonderful educational opportunity.

Following such an amazing visit, I opted to treat myself to an upscale seafood meal at one of my favorite London restaurants – Loch Fyne. I love this place. The food is good and customer service is always phenomenal.

Although my mouth watered at the seafood platter of crab and salmon in a white wine sauce, my wallet screamed at the £45 cost. I opted instead for Pan Fried King Prawns with chili and garlic as the starter, with the grand ole favorite of Fish & Chips as the main. Delicious!! 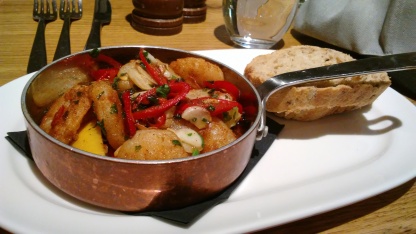 The next day I explored one site I’ve seen so many times, but never actually visited — Tower Bridge.

I’ve taken so many photos of this iconic landmark, but never been inside to see the inner workings. That change on this trip. I was also fascinated to learn how something built more than 125 years ago is still standing and in perfect working order, while my house – built less than 20 years ago – is already fallen apart. Ponder that tidbit for a moment.

Now many people will squawk at paying £10 to walk inside the bridge, but I say to them, “keep squawking — you’re missing out on an amazing bit of world history.” Also, I had a London Pass, so the entrance fee was included, plus it came with a fast track entry. 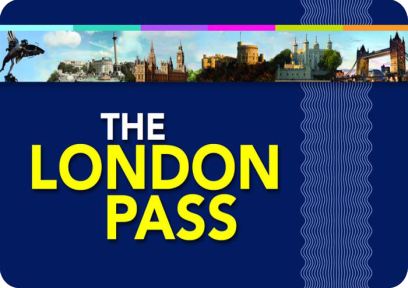 Free entry to over 80 attractions, tours & museums including Tower of London, Westminster Abbey and many more!

I wasn’t expecting much, so imagine my surprise at all the tour showcased. From the elevator ride to the top (yeah, after all the walking I did in Cromer and Norwich, my legs hurt, ha ha), to the Engine Rooms, the experience was truly an experience.

My favorite parts were walking over the Glass Walkway and playing the interactive game where you were the Bridge Operator and you had to keep the bridge running. I lost because I left the bridge’s bascules up to long, causing a pedestrian traffic jam. Ha ha that was fun! 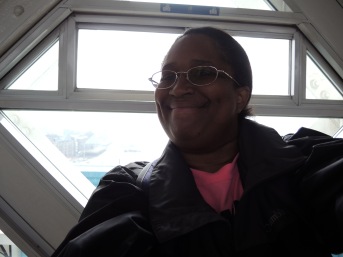 The Glass Walkway was a bit scary. The birds-eye view is incredible, but a slight fear of heights cause a little anxiety. Yet I motored through and got some nice photos of the world below. 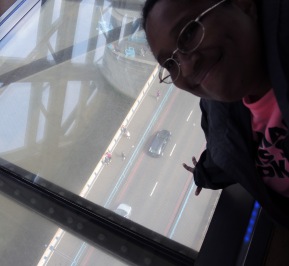 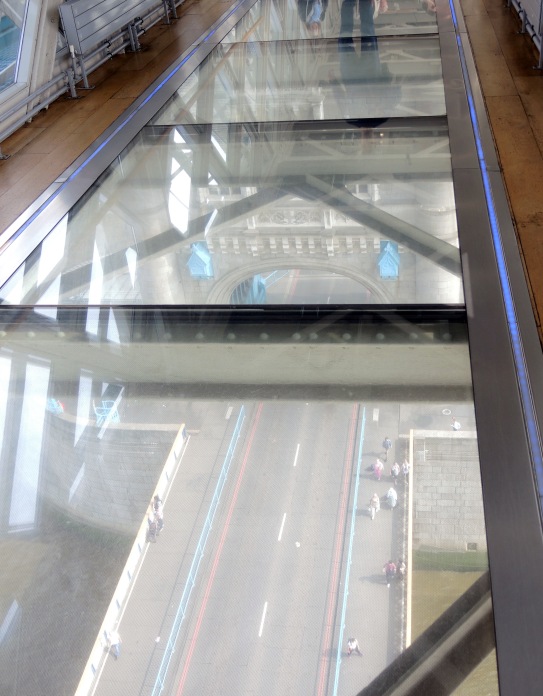 After walking across the bridge, I headed to the Engine Rooms to learn more about this amazing feat of engineering. Seeing the original steam engines, coal burners and accumulators that once powered this bridge was remarkable. 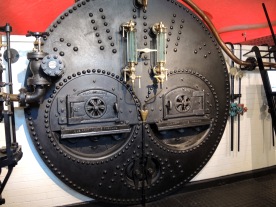 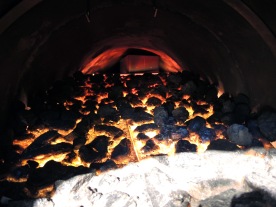 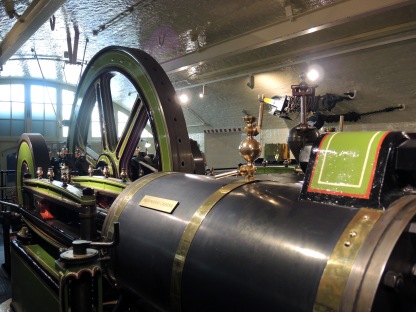 Yet it was learning about the people who brought the bridge to life that was the most important lesson of the day. People like Hannah Griggs, the first woman to work at Tower Bridge. According to her profile, Hannah was born to a single mother in the East End of London. She became a cook and started work at Tower Bridge in 1911. She left the bridge in 1915 after marrying and having a baby. 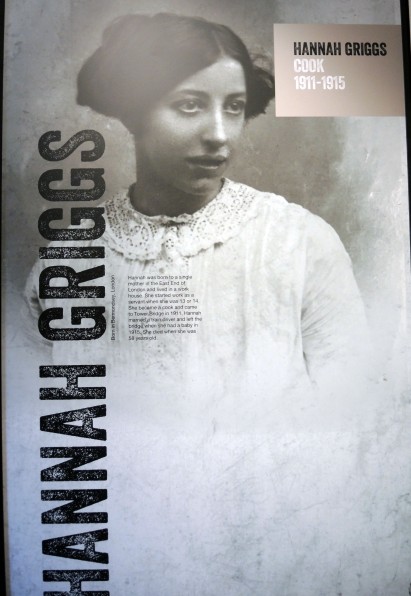 Too many, Hannah’s job may not have been that important, but as the saying goes “an army marches on its stomach.” No food, no work.

I ended my visit with a trip to the gift shop, where I bought a small history guide about the bridge. I then headed outside to watch the lifting of the bascules. Watch the video below. It’s a fascinating sight.

My visit was so awesome, I wanted to learn more about the bridge, like how Tower Bridge was not bombed during World War II; it was used by enemy planes as a landmark for navigation. Even the enemy understood this icon’s importance.

Following a quick lunch at another of my favorite London eatery’s – Pret A Manger – I went in search for The Old Operating Theatre Museum.

This museum was a little hard to find. I got upset and almost gave up searching for it. Luckily, I bumped into two other world travellers also searching for the museum. We finally found the entrance and climbed the narrow 52-step spiral staircase to the attic. The steps were a reminder of why I should never, ever buy a house with a winding staircase. Yikes! Again, thanks to my London Pass, the £6.50 entry fee was included. 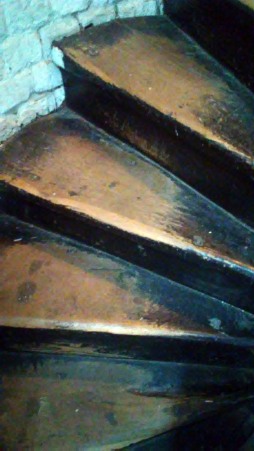 A bit about this museum – The Old Operating Theatre Museum and Herb Garret offers an eye-opening view into the medical profession of the past. The museum is hidden in the roof of St Thomas’ Church near London Bridge Underground and rail services and houses Britain’s only surviving operating theatre, complete with wooden operating table and observation stands, from which onlookers witnessed surgery performed before anesthesia or antiseptics. Ouch!!!

Quite a history is featured inside this hallowed roof. On first view, this place is weird and scary. Yet, as I strolled along, I gain more insight into medicine and operations in the 19th century. So glad I didn’t need surgery back then. If you visit, I recommend attending the Victorian Surgery Talk. It features a mock surgical demonstration of how surgeries were performed during Victorian times, without anaesthesia or basic hygiene like hand-washing or antiseptics. Did I mention how happy I am I didn’t need surgery in the 19th century? 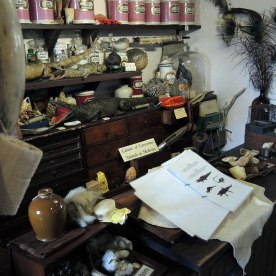 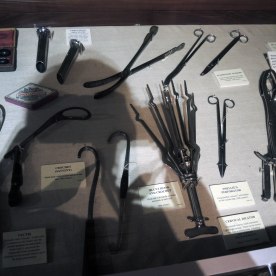 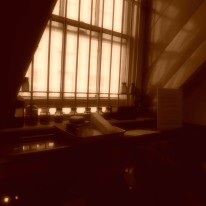 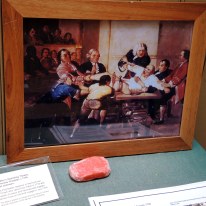 The Old Operating Theatre Museum visit was much more interesting than I expected and so glad I didn’t give up looking for the entrance – though I the stairs were not so much fun. 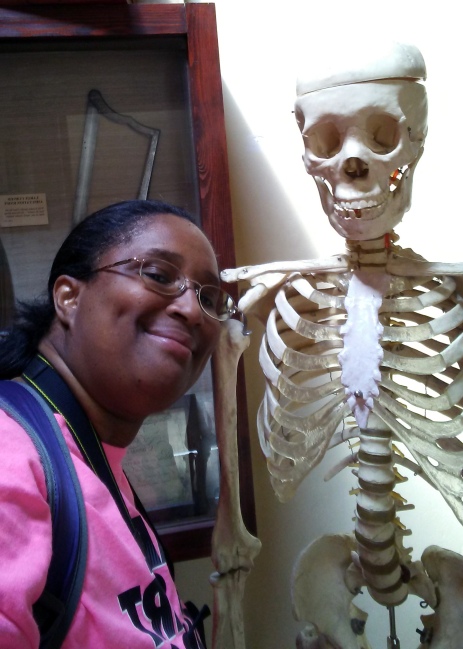 Me and my Buddy

Later that evening, I came across Bodean’s BBQ Tower Hill restaurant. I thought a barbecue dinner would top off my awesome day. Oh, how wrong was I!

My meal was edible, but only barely. I ordered BBQ chicken with corn on the cob and potato salad. Imagine my surprise to receive my meal and noticed there was no BBQ sauce on the chicken. The corn looked deformed and the potato salad was mostly mayonnaise. If the meal was this bad, why, oh why did I order dessert? My Apple Cobbler, at least that’s what it was called, was even more disgusting. The apples weren’t cooked and the cobbler was rubbery and not edible. If in London near the Tower – AVOID THIS PLACE LIKE THE PLAGUE!!!!!!!!!! 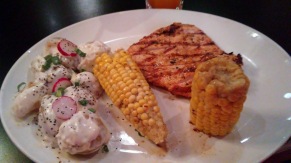 On Sunday, I broke down and became a tourist, which means I went shopping for souvenirs. Once again, I headed to Tower Hill Station and headed to Piccadilly Circus, followed by a trip down Oxford Street and a Sunday Roast lunch at the Leicester Arms.

After lunch, I ended my shopping spree in the heart of London’s West End – Carnaby Street.

Actually had fun shopping for souvenirs. Maybe it was because I was buying things for myself as opposed to buying trinkets for others. I like that feeling. I think I’ll continue the trend. And yes, I brought home some “Royal Wedding” souvenirs.

I met so many people 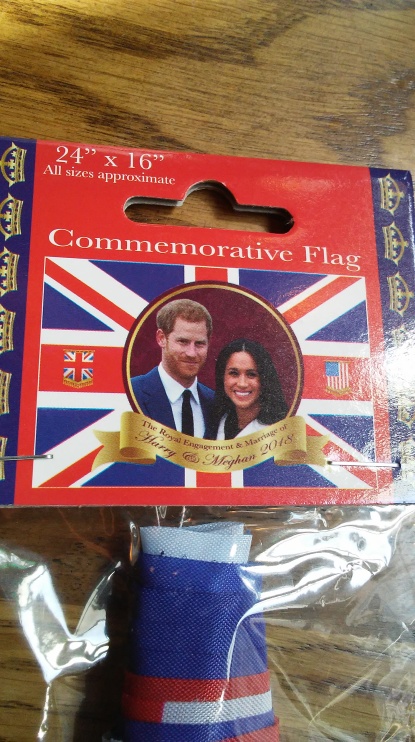 After shopping and catching a movie, I headed back to the hotel, packed and prepared for my travels to Almancil, Portugal.

HAVE PASSPORT, WILL TRAVEL!